Young people with Spina Bifida who are of the age to transition to adult health care services need the right support and guidance to succeed. Originally known as the Krainiak transition materials, this summary and worksheet assists health care providers and families who have transition-age children and patients move away from pediatric to adult services.

Spina Bifida (SB) is a neural tube defect in which there is failure of the neural tube to close very early in pregnancy, resulting in a spinal cord defect usually visible at birth. The most common form of SB in which there is an open lesion is myelomeningocoele (MM), but other types of SB exist, including occult dysraphism where lipomas may be present. The MM subtype is associated with varying degrees of lower extremity paralysis and sensory loss, hydrocephalus, Chiari II malformation, syringomyelia, tethered cord, bowel and bladder dysfunction, and some learning disabilities. Conditions such as hydrocephalus, Chiari II, and syringomyelia, are not generally seen in those with lipomas and other forms of occult dysraphism. SB is generally not felt to be a progressive condition, and any deterioration in adulthood should prompt a search for a treatable condition.

Most individuals with MM have hydrocephalus, which is most commonly treated with a ventriculoperitoneal shunt. Shunt malfunction is a common problem in patients with MM and can present with a wide range of symptoms including headache, nausea, vomiting, blurred vision, as well as subtle symptoms like deterioration in sensorimotor function, changes in bladder function, back pain, or changes in school performance, cognition, or memory. In most cases of shunt malfunction, the ventricles will appear enlarged on CT compared with a baseline CT done when the patient is asymptomatic; however, up to 15% of patients with MM can have a shunt malfunction with no significant change in ventricular size.

Therefore, if symptoms of shunt malfunction are present, consultation with an experienced neurosurgeon is recommended regardless of CT findings. Most cases of shunt malfunction will require shunt revision,  although in rare cases, shunt malfunction may be caused by constipation which puts pressure on the distal end of the shunt. The Chiari II malformation is seen in almost all patients with MM, although only 10-15% become symptomatic, and the majority of these present during infancy. In the Chiari II malformation, the cerebellar tonsils, vermis and brainstem descend through the foramen magnum to a variable degree.

Surgical intervention may become necessary for symptomatic patients with swallowing difficulties, breathing difficulties or stridor, severe sleep apnea, increasing sensorimotor dysfunction, headache and/or neck pain. These symptoms should prompt a referral to a neurosurgeon. The most common cause of Chiari symptoms in adults is a shunt malfunction; rarely symptoms may require decompression surgery.

Associated syringomyelia – an accumulation of cerebrospinal fluid within the spinal cord – may often be present with the Chiari malformation but requires treatment only 15-35% of the time, usually due to back or limb pain, or sensorimotor loss.

Tethered cord occurs when the spinal cord becomes progressively stretched due to its attachment to the distal end of the spinal canal. Tethering is a universal radiographic finding but symptoms from spinal cord tethering – referred to as tethered cord syndrome – occurs in only about 1/3 of patients, and even less frequently in adults. Tethered cord syndrome is mansifest by worsening scoliosis, back or leg pain, sensorimotor changes, spasticity, and worsening bladder or bowel function, and may require neurosurgical evaluation and untethering of the spinal cord.

Neurogenic bladder dysfunction occurs in over 90% of patients with SB and can be manifested across a spectrum ranging from small, hyperreflexic bladders to large, flaccid bladders. The goals of urologic management are preservation of renal function, reduction in urinary tract infection, and attainment of continence, if so desired by the patients. Elevated bladder pressures due to hyperreflexic or poorly compliant bladders can result in renal damage and, eventually, failure. Anticholinergic medications, such as oxybutynin, are used in many patients to keep bladder pressure low and are combined with bladder catheterization to attain continence. Some patients have had bladder augmentation surgery to improve bladder volumes and/or reduce pressures, and some have an abdominal wall or umbilical stoma (Mitrofanoff) through which to catheterize the bladder avoiding the urethra. Some also require bladder neck surgery to attain continence. Approximately two-thirds of all patients self-catheterize to empty their
bladders, so bacteriuria is often present but does not necessarily indicate infection nor require treatment.

Symptoms of infection (abdominal pain, fever, malaise, or urinary changes such as increasing incontinence) suggest a bladder infection and require treatment, but it is not recommended to check urine in asymptomatic patients or treat bacteriuria alone. Individuals with thoracic level SB may lack the usual signs of dysuria or flank pain. Patients with MM are at increased risk for bladder and renal stones, as well as bladder cancer. A yearly urology visit is recommended. Routine annual renal and bladder ultrasound and GFR/creatinine are important. Proteinuria may indicate early renal problems. Those with augmented bladder may need to undergo regular serum chemistry assessment due to risk of metabolic acidosis and periodic cystoscopy due to increased risk of malignancy.

Neurogenic bowel problems generally result in constipation and/or incontinence. Most patients are on an oral bowel regimen, timed toileting program, and/or enema program. Some patients have an operation to bring the appendix to the skin in a continent manner to allow an antegrade enema to completely evacuate the colon, typically every 1-3 days. This operation is called an antegrade colonic enema (ACE) or MACE (Malone ACE), and a cecostomy tube or button may be used in patients without a suitable appendix.

For many, that will involve a combination of walking and use of a wheeled mobility device. Some will be full time wheelchair users.

Skin integrity is vital as skin breakdown in areas of insensate skin is common and can lead to osteomyelitis or sepsis. Patients should check their skin daily and perform weight shifts regularly throughout the day. Prevention and treatment strategies are aimed at reducing pressure and shear (cushions, properly fitting braces), improving nutrition, and eliminating or minimizing incontinence.

Lymphedema is also very common and must be distinguished from other forms of edema. Referral to a Lymphedema treatment center may be necessary. Latex allergy is common in this group, and universally applied latex precautions should be taken.

Restrictive lung disease in those with higher level lesions due to scoliosis and muscle weakness may require pulmonology evaluation. Obstructive and central sleep apnea may also contribute to pulmonary dysfunction and can contribute to sudden death in adults if left untreated.

Learning disabilities often include difficulties with “executive function” in which impairments of organization, inference, and insight are common. Many have had difficulties with reading comprehension and math. Depression, unemployment and social isolation are common.

Women with SB are generally fertile, and they are capable of becoming pregnant. Pregnant women may have worsening gait, bladder control, or shunt problems with pregnancy; consultation with a high risk OBGYN is recommended. Women who have SB or who have already had a child with SB and who want to conceive should take 4mg of Folic Acid daily (rather than the recommended RDA of 400 mcg in those without SB) for one month prior to conception until the end of the first trimester to prevent neural tube defects in the baby. It is also recommended for wives of men with SB to do the same; however studies to support this recommendation are lacking.Although many men with SB can achieve and sustain an erection, pre-treatment before intercourse with drugs can improve the ability to maintain an erection.

Many men with SB are fertile, but sperm counts can be decreased. Ejaculation may occur retrograde into
the bladder. In addition to the specific challenges related to SB, adults with SB should undergo routine medical care
and screening that would be provided to individuals without such a disability. Obesity, diabetes, and cardiovascular risk factors are prevalent in this population. Renal etiology for hypertension should be considered in this population. Increased risk factors for breast, uterine and ovarian cancer may be due to early menarche, nulliparity, and obesity.
Although the exact life expectancy for adults with SB is not known, patients are now living into their 7th and 8th decades. It is of utmost important to be proactive in the care of these individuals in order to prevent secondary medical complications that can reduce independence and quality of life.

Signs of a Shunt Malfunction

Signs of a Shunt Malfunction 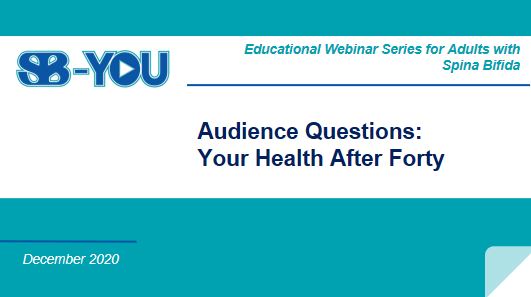 Attendee Questions: Your Health After Forty

Attendee Questions: Your Health After Forty