Children with Spina Bida and hydrocephalus may start puberty earlier than their peers. 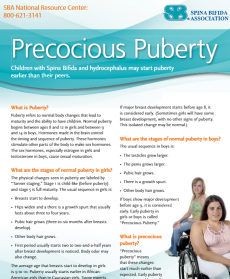 Puberty refers to normal body changes that lead to maturity and the ability to have children. Normal puberty begins between ages 8 and 12 in girls and between 9 and 14 in boys. Hormones made in the brain control the timing and sequence of puberty. These hormones stimulate other parts of the body to make sex hormones. The sex hormones, especially estrogen in girls and testosterone in boys, cause sexual maturation.

What are the stages of normal puberty in girls?

The physical changes seen in puberty are labeled by “Tanner staging.” Stage 1 is child-like (before puberty), and stage 5 is full maturity. The usual sequence in girls is:
• Breasts start to develop.
• Hips widen and a there is a growth spurt that usually
lasts about three to four years.
• Pubic hair grows (three-to-six months after breasts
develop).
• Other body hair grows.
• First period usually starts two to two-and-a-half years after breast development is noticed. Body odor may also change.

What are the stages of normal puberty in boys?

The usual sequence in boys is:
• The testicles grow larger.
• The penis grows larger.
• Pubic hair grows.
• There is a growth spurt.
• Other body hair grows.
If boys show major development before age 9, it is considered early. Early puberty in girls or boys is called “Precocious Puberty.”

What is precocious puberty?

Another major problem with early puberty is that body changes happen much earlier than in other children of the same age. This makes a child appear different.

Adults might expect them to act older than they are. This can be hard for children because they can’t live up to how others think they should act. For children with Spina Bida, early puberty and all of the problems that go with it can make daily life more difficult.

Why are children with Spina Bida and hydrocephalus more likely to start puberty earlier than their peers?

No one knows for sure why children (especially girls) with Spina Bida and hydrocephalus are more likely to have early puberty. Most think that hydrocephalus changes the time when the brain sends “puberty hormones” into the bloodstream.

What do I do if my child shows signs of precocious puberty?

Your child should be seen by a health care provider if he or she:
• Starts puberty early;
• Has an unusual sequence of the steps outlined above; or
• Has very fast sexual development.

Your child would be referred to an endocrinologist (a doctor who specializes in hormones). If no other problems are found, the most common treatment is to delay puberty. There are hormonal treatments that can stop puberty, usually after three to six months; and may reverse some changes.

GnRH analogs, synthetic hormones that block the body’s production of the sex hormones that cause precocious puberty, are available under different names, but Lupron and Supprelin are the most commonly used medications. Positive results are usually within a year of starting treatment with a GnRH analog, and the drugs are considered to be generally safe. However, all drugs potentially have side effects, and families should discuss this with their physicians.

What is the benet to delaying puberty in my child?

It is thought that delaying puberty helps children grow taller than they would have been otherwise. More important is the delay in sexual maturation should allow children (and parents) to adjust to their growing bodies and feelings and help them have a healthy
sexual identity.

This information does not constitute medical advice for any individual. As specific cases may vary from the general information presented here, SBA advises readers to consult a qualified medical or other professionals on an individual basis.