It’s a hard pill to swallow, hearing that your child is going to be born different. When we received the news that our son, Maddux, would be born with Spina Bifida, I was speechless. I laid on the table in the specialist’s office as he went through every detail of my unborn son’s level 2 ultrasound, which showed exactly where the opening on his spine was located. The doctor proceeded to tell me my options: “You can carry to term, which is very risky and he will require immediate surgery after birth; you can see if you qualify for fetal surgery, or you can terminate the pregnancy.”

There was a brief silence, then he asked, “How are you feeling?”

I couldn’t bring myself to respond. He asked again. And again, I was silent.

He apologized as if the pregnancy was already over. I remained as stone-faced as I could until I could no longer fight back the tears. I had just felt my baby “kick” earlier that morning. I listened to his heartbeat religiously at home. It was the most calming sound I had ever heard. And now I have to contemplate aborting the child that I so desperately wanted. The child that took four years and two fertility treatments to conceive. How does he think I would feel?

The following week, we decided to get a second opinion from a doctor that was referred to us by our fertility specialist. He confirmed what the previous doctor found – that our son had the most severe form of spina bifida, known as myelomeningocele. He recommended we go to UC San Francisco to see if we were candidates for fetal surgery, which would repair our baby’s spine in utero. However, as there is only a short window of time in which this surgery can be done, we needed to proceed as quickly as possible.

After the exam, and as if to make his point, he very candidly said to us, “If you had a child that was in a terrible car accident and he lost the use of his legs, would you discard him?” Then he asked, “If your child was diagnosed with cancer later on in life, would you stop loving him?”

“No, you wouldn’t,” he continued, “and this is no different here. You do the best that you can and you hope that it is enough.” Those words would stick with me throughout the next few months, as we began to fight for the best possible outcome for our little guy.

Having gone through this experience, I could never judge anyone for making a decision that was best suited for their situation. You truly never know what a person is going through until you walk a mile in their shoes. I can tell you that I have never prayed harder in my life, than in the few weeks I spent awaiting the results of the amniocentesis and approval for fetal surgery. My husband and I had to remain open-minded until we got the results. We had three options, each with their own complicated set of circumstances. I pleaded with God to give me the strength to make the best decision for my family and I could only hope that termination could be eliminated as an outcome.

When Maddux was two-months-old, we were at spina bifida clinic and his orthopedic doctor asked if anyone ever mentioned to us that our son may have achondroplasia. “Achondro-what?”, I thought. He explained that Maddux’s arms and legs were much shorter than normal and that he had other features that fall in line with a baby with dwarfism. Maddux had been in the NICU for 10 weeks and no doctor ever mentioned anything to us about dwarfism. No way. I’m not going to accept that, not after all we had already been through, I thought.

Fast forward seven months to when we finally got in to meet with a Genetics doctor (apparently, getting in with a good genetics doctor is hard to come by, so I was grateful a business connection put us in touch.) She read over the bone-scan report that was done two months prior and then performed a physical exam on Maddux, carefully looking over every inch of his tiny body, making notes along the way.

She stepped out of the room for a few minutes. When she returned, she told us, “Based on his medical report and what I see today, I can confirm that your son has achondroplasia, the most common form of dwarfism.”

Although I knew that would more than likely be the outcome, it still wasn’t any easier to hear. The doctor reassured us, “You have a gorgeous baby boy and he is incredibly happy. Little people go on to live incredibly fulfilled lives. He is going to thrive. You’ll see.”

At that instant, I was taken back to the very moment when we were given his initial diagnosis of spina bifida and all of the questions that I shoved into the furthest corner of my mind:

What will his quality of life be?

What will he miss out on?

Will he be able to provide for himself as an adult?

Will he have a family of his own someday?

Will he have any close friends?

The tears came rushing down my face. Here we go again. I started to think about how Maddux will be treated by strangers and peers as he grows up. The stares and the questions, the bullying and the sadness he may feel when/if this happens.

My greatest fear is that I won’t be as strong as he will need me to be for him. Or that I won’t have the right words to help him through the difficult times. I fear that ignorant people will prey on him and all he will have are his words to protect him. How will he handle adversity?

The most difficult part is telling people the news. Saying the words, “My son has dwarfism… on top of spina bifida” really stings. Not just for the fact that he will be small but that he will have to explain to people for the rest of his life why he is different. He didn’t ask for any of this.

I am incredibly grateful for the overwhelming support of our family and friends. When I start to feel sorry for myself, I realize that this is not about me. This is the fear taking over and this is me worrying about all of the things I have no control of. I am learning that we have very little control over anything (which is extremely difficult for a control freak like me). Instead, I’ve come to appreciate the beauty of what’s in front of me. My little boy has the sweetest smile I have ever seen and his infectious laughter has me crying tears of pure joy. His witty personality has me laughing hysterically and it is in these moments that I know he is going to live an amazing life. He is perfect in every sense of the term.

I will constantly remind my son of his value and how loved he is. I will remind him that his father and I wanted him so badly and that God doesn’t make mistakes. I will raise him to accept that everyone has their differences and that’s what builds our character and makes the world go around. I will be his biggest advocate for the rest of his life and I can only hope that with all of that, he will never feel alone or that he is any less of a person.” – Desiree Remillet, Mother to Maddux 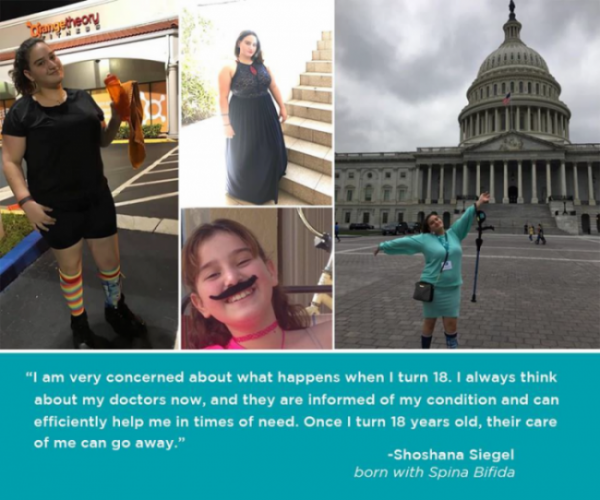 Preparing for my Future: Shoshana’s Story

Preparing for my Future: Shoshana’s Story 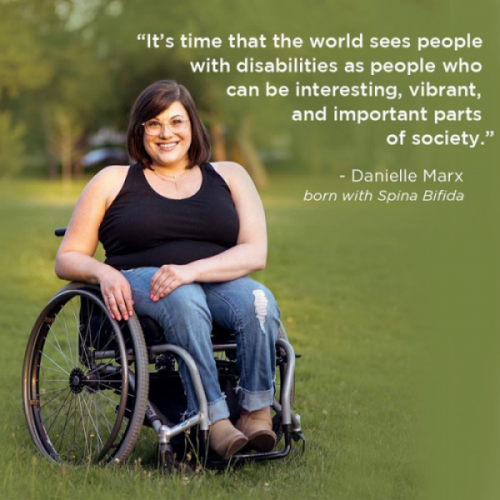