Hydrocephalus means there is a build-up of cerebrospinal also called CSF, around the brain. 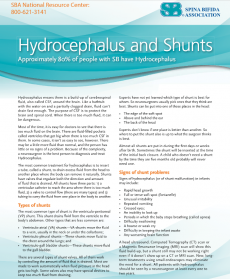 Like a bathtub with the water on and a partially clogged drain, fluid can’t drain fast enough. The purpose of CSF is to protect the brain and spinal cord. When there is too much fluid, it can be dangerous.

Most of the time, it is easy for doctors to see that there is too much on the brain. There are pockets called ventricles that get big when there is too much CSF in them. In some cases, it isn’t as easy to see. There may be a little more fluid than normal, and the person has little or no signs of a problem. Because of the complexity, a neurosurgeon is the best person to diagnosis and treat hydrocephalus.

The most common treatment for hydrocephalus is to insert a tube, called a shunt, to drain excess fluid from the head to another place where the body can remove it naturally. Shunts have valves that regulate both the direction and amount of fluid that is drained. Shunts have three parts:

2) a valve to control flow (there are many types)

3) tubing to carry the fluid from one place in the body to another.

The most common type of shunt is the ventriculo-peritoneal (VP) shunt. This shunt drains from the ventricle to the abdomen. Other types that are less common are:

There are several types of shunt valves. All of them work by controlling the amount of fluid that is drained. Most are made to work automatically when fluid pressure in the head gets too high. Some valves also may have special devices to keep too much fluid from draining. Experts have not yet learned which type of shunt is best for whom.

Neurosurgeons usually pick ones that they think are best. Shunts can be put into one of these places in the head:

Experts don’t know if one place is better than another. So where to put the shunt also is up to what the surgeon thinks is best. Almost all shunts are put in during the first days or weeks after birth. Sometimes the shunt will be inserted at the time of the initial back closure. A child who doesn’t need a shunt by the time they are 5 months old probably will never need one.

Signs of hydrocephalus (or of shunt malfunction) in infants may include:

A head ultrasound, Computed Tomography (CT) scan or a Magnetic Resonance Imaging (MRI) scan will show this build-up, but a shunt still may not be working right even if it doesn’t show up on a CT or MRI scan. New, long-term treatments using small endoscopes may eliminate the need for a shunt. All patients with hydrocephalus should be seen by a neurosurgeon at least every one to two years.

Most people with Spina Bifida and shunted hydrocephalus will need the shunt for life. The most common problem with shunts is that they can get blocked up, break or come apart. About 40 percent of shunts will fail and need changing (or revision) within one year, 60 percent within years and 80–85 percent within 10 years. About 20 percent of people with Spina Bifida will need more than one shunt revision.

Shunt malfunction can look like any of the signs of a Chiari malformation or spinal cord tethering. When the brain or spinal cord function gets worse, and there is no other clear cause, health care providers should check to see if there are shunt problems.

To see if there is a problem with a shunt, health care providers will study images of the brain (usually a CT scan or, for children under one year, a head ultrasound).

When ventricles start to get too big, it is a strong sign that the shunt is not working right. It is important to know that some people (between 5 and 15 percent) with Spina Bifida may have very few signs or even no visible change in the size of the ventricles when the shunt is not working correctly. On the other hand, some people with shunted hydrocephalus can develop the slit (or stiff) ventricle syndrome. For these people, too much fluid drainage leads to very small (or slit) ventricles. In these cases, experts think that the walls of the ventricles temporarily block the shunt catheter. This leads to a series of temporary shunt malfunctions without any visible increase in the size of the ventricles.

Families and health care providers must pay close attention to a person’s symptoms, especially if they are similar to those that were present with previous shunt problems.

The diagnosis can be checked by putting a small needle into the valve or a chamber of the shunt and taking out fluid for study. Infections are commonly treated with antibiotics and with removal and replacement of the shunt system. There are two ways of doing this. The first is to take out the shunt system and then put in a temporary external drainage tube at the same time that antibiotics are given. When the treatment is done, the tube is taken out, and a new shunt is put back in. This almost always stops the infection, but it takes two operations.

This information does not constitute medical advice for any individual. As specific cases may vary from the general information presented here, SBA advises readers to consult a quailed medical or other professionals on an individual basis.